The main issues that Jamie McMechan addresses in his video work are those that affect the Maritime Union of Australia (MUA) and its members. Issues such as campaigning for workers rights, human rights, equal pay for women, violence against women, raising money for charities among others. 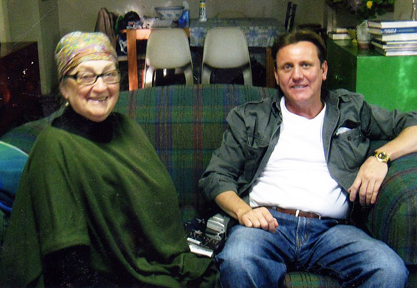 About: Jamie McMechan is a full-time wharfie and activist. He is also a one-man band filmmaker who owns a small business called "PowderKeg Video Production", and part of the Maritime Union of Australia (MUA) Film Unit, a role which has taken him to various places in Australia and overseas like Cuba and Timor-Leste.

In short, a group of wharfies got together and decided to raise much-needed funds for the Sydney Children’s Hospital at Randwick by holding a boxing night at South Sydney Juniors Leagues Club. The event was a huge success raising in excess of AUD52,000 on the night through ticket sales and raffles. I’m currently editing the footage and will post it on EngageMedia.org to further promote the unions ongoing commitment to raising money for charities other social issues.

In his own words:

Engage Media (EM): Tell us who you are as a filmmaker.

Jamie McMechan (JM): As a filmmaker I own and run a small business called “PowderKeg Video Productions” doing film work predominately for the Maritime Union of Australia (MUA), which I have been an active member of for the past 21 years. I am essentially a one-man band at this stage, doing interviews, filming, editing, DVD production and artwork for the covers and discs myself. I hope in the future to collaborate and learn a variety of skills from other filmmakers. Being one out has its advantages too, as I’m able to respond quickly with very little preparation time. In addition to that I work full time as a stevedore loading and unloading international cargo ships for the past 21 years.

My role as a filmmaker for the MUA Film Unit has taken me to various overseas locations such as Timor-Leste and Cuba as well as locations all over Australia. The Waterside Workers Federation of Australia had a film unit back in the 1950s. It was the first of its kind in the world and had three founding members, namely, Norma Disher, Keith Gow and Jock Levy. Norma will turn 87 years old in November (see picture) and over the past few years, I have gotten to know her very well. We both share a passion for left-wing politics and documentary filmmaking which gives us plenty to talk about. I regard Norma as my good friend and mentor. She has had a hand in producing over 17 films for the labour movement and some have received international acclaim. As a filmmaker I value her insight and feedback on my work – she really is an inspiration to me on many levels; her political, social and environmental views are all positive and progressive. I believe I perform an important role for the Maritime Union for a number of reasons.

One is to document and preserve the history as its evolves for the future generation of unionist and the other is to promote and produce content in the event of a dispute such as the Patricks Dispute back in 1998. My plan for the future is to continue to build and expand on the body of work that the Waterside Workers Federation Film Unit (WWFFU) pioneered back in the 1950s and continue to learn and refine my filmmaking skills.

JM: I first got into film making when the Maritime Union advertised a competition called “MUA Idol” back in 2005. I borrowed my sister’s handy cam and downloaded some basic editing software from the internet and decided on a narrative titled, “The Role of the Delegate”. Although I came fourth in the competition, I wasn’t deterred as it provided me with some elementary skills and a better understanding of the whole process of filming, interviewing and editing. So when the following MUA Idol competition came around the next year, I entered again and came first and won a prize to study documentary filmmaking at Sydney Film School. I completed the documentary strand of the Diploma in Screen offered by Sydney Film School at Waterloo. Since I work full time and run a business, it is too difficult to study a full-time course, so I attended part-time doing the evening classes.

The reason I use video as a medium is that I can reach, persuade and influence large numbers of people from around the world. Using the internet as the portal, it is very cost-effective for the MUA. The internet has provided the vehicle for social websites such as EngageMedia.org to grow, expand and attract activists from all corners of the globe to get active and get filming. The Maritime Union now has the ability to promote and support social, environmental and political issues on the world stage within a few hours in some cases.

For the first time in history a person with a camera or even a mobile phone can have a profound impact on millions of people from around the world. And in some ways can actually compete with the right-wing mainstream views of multi-national media moguls such as the Rupert Murdoch’s of this world. I simply believe that a monopoly in the media industry leads to corruption, distortion and often factually bias content which must be challenged.

JM: The main issues that I address in my video work are those that affect the MUA and its members. Issues such as campaigning for workers rights, human rights, equal pay for women, violence against women, raising money for charities such as the McGrath Foundation (Breast Cancer) and the Sydney Children’s Hospital. The MUA also supports humanitarian issues in South Africa, Cuba and Timor-Leste (to name only a few). The MUA contributes to Union Aid Abroad-APHEDA which is the overseas aid agency of the Australian Council of Trade Unions (ACTU) fighting for workers rights and injustice.

The Maritime Union is a leader within the union movement both locally and internationally. The National Secretary of the MUA, Paddy Crumlin, has only recently been elected to President of the International Transport Workers Federation (ITF) which covers in excess of five million transport workers globally.

This is quite an achievement for a union with just on 11,000 members nationally. On a local level I have been producing video footage as part of the ongoing campaigning against the privatisation of the “Sydney Ferry Service,” and I will continue to do so.

EM: We saw some of your films on John Pilger and the Sydney ferries, please tell us a bit about these videos and the background?

JM: John Pilger is a great man. An award-winning author, journalist and documentary filmmaker who happens to live close to a ferry wharf in Sydney. I first met John when I was filming campaign material to save Sydney ferries from privatisation. John was approached by one of the ferry deckhands and asked if he would participate in the “Save Our Sydney Ferries” campaign which to my surprise he agreed to.

Arrangements were then made to meet at Gladstone Park Bowling Club, where the iconic Balmain Ukulele Club have band practice under the leadership of bandleader Dennis Aubrey a prominent local musician. A satirical jingle about the pending privatisation was written by Tim Glover, a Sydney ferry worker to the tune of the German World War II song “Lilly Marlene” and the “Balmain Ukulele Club,” performed it on the day, several times. It was one of the best days, I’ve had filming so far. After three takes of the song, I interviewed John for around 30 minutes. I had all my questions set out clearly and double-checked all the equipment and sound. I was so nervous and he was just so relaxed. Straight away I sensed the presence of honesty and integrity when he spoke and the professional way he articulates his point of view. It really was an inspiring moment for me as a fledgling filmmaker.

Afterwards we all had a few beers discussing music, politics and the pending privatisation of the ferries under the shade of a huge tree. I would regard it as a typically Australian thing to do. Norma was there talking politics with John and helping arrange all the musicians, it really was a memorable day for all involved. I later sent the footage of the Balmain Ukulele Club to the ABC program Stateline where it was broadcast on national television giving the campaign a real boost and raising the public profile of the campaign.

JM: I don’t have one favourite piece of video, but what I do favour is the “The Save Our Sydney Ferries” campaign involving journalist John Pilger, activist and environmentalist Jack Mundy, Greens MP Lee Rhiannon and Jamie Parker, The Balmain Ukulele Club, Unions NSW, Norma Disher, The Sydney Branch Executive and all the members of the MUA and the local community for a job well done.

JM: The internet has had a profound impact on reducing production costs and distribution costs. Within minutes you can reach an international audience and receive feedback on your efforts. People are quite happy to view your work online as opposed to purchasing a DVD copy of your work. There is no real money to be made posting your work on the internet – it just doesn’t pay. But as most filmmakers would already know, it could lead to greater opportunities down the line.