SEL 49: The Soft Launch that Turned into a Hard Core Event

It was a night when technology meets humility as the residents of Sawah Lunto Street in Manggarai, South Jakarta saw a different kind of crowd at the opening of SEL 49 on December 13, 2009. There were screenings, traditional food, acoustics, loud music, and a gathering of people from different backgrounds.

SEL 49 is the joint office of EngageMedia, the Independent Videomaker Network (JAVIN), and GloW Alliance. The three groups joined in the quest to work together in sharing knowledge and concerns on social justice and environmental issues through videos and other means. While both EngageMedia and JAVIN are video focused groups, GloW Alliance focuses on bringing the climate crisis issues prominent through various methods, although several of its founders are filmmakers. Aside from being a workplace, SEL 49 – the name is short for Sawah Lunto and the prison-like features of the building – opens its doors for people to screen films, discuss films, books, and issues, upload and download videos, and also to share knowledge. 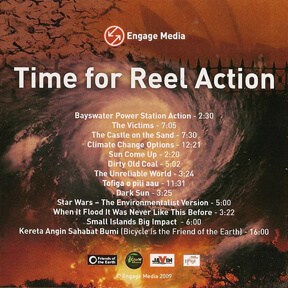 What was planned for a soft launch turned out into a grand launch as more than 150 people turned up for the launch, from young filmmakers to seasoned historians, from tattooed activists to the daughter of a former Indonesian President. With the help of the community, the organisers blocked the Sawah Lunto Street and set up two event areas – the tent on the road, and inside the office. The show kicked start with Indo Beatbox performers, remarks from the local “Pak RT”, welcoming speeches from representatives of the three host groups, then the “layar tancap” (outdoor screening) of “Time for Reel Action” climate crisis video compilation.

The compilation itself is an initiative by EngageMedia to collect climate crisis videos from Asia and the Pacific which were later put into DVDs and distributed throughout the network in the region. Aside from Jakarta, the films were screened in Australia and Denmark, where the UN Climate Change summit took place. EngageMedia, JAVIN, and GloW Alliance also combined to produce a film called “Green Gone Wrong” which raises the issue of green trends in Indonesia and the thirst for profit from the palm industry.

After the screening, the crowd was treated by traditional snacks and live musical performances inside the office space with EngageMedia’s very own training and project coordinator/hip hop artist Nova Ruth, guitar guru Toto Tewel, Rustique Kollektiv, Jalan Surabaya, Technoshit, and Marginal. The event inside was also screened outside at the tent via live web feed.

As the night went on, people started to realise that SEL 49 is a different kind of place. In the latter days, the office was filled with more paintings and art installations donated and loaned by artists. SEL 49 is open for anyone and welcomes ideas from anyone with the thought of making a bit of difference. See you at SEL 49!