Skip to content
Visit Cinemata, a platform for social and environmental films about the Asia-Pacific.

Eclectic is the word that jumped to mind as I reflected on the Global Voices Citizen Media Summit in Santiago, Chile. The event, from May 6-7, brought together a broad array of people and approaches to citizen media.

Eclectic is both a positive and critical appraisal. On the one hand, the strength of Global Voices appears to be its ability to scale and build a large community and audience through a diverse set of approaches. On the other hand, the level of eclecticism was at times confusing – product placements for Yahoo’s http://me.me service and only blunt criticism of the private companies that control many of the spaces that citizen journalists rely on meant it was hard to know where Global Voices stood on key questions of internet freedom.

First the positives. The summit was impressive in demonstrating how well Global Voices has been at building a large online community; the 5 or 6 core staff and dozen or so regional coordinating editors are dwarfed by the hundreds of volunteers. The Lingua project for example has 120 active volunteer translators resulting in an impressive multilingual site. On the other hand, I’m still learning how governance at Global Voices happens and would love to have been a fly on the wall at the 2 days of internal meetings that happened after the conference. Many other projects implode long before they build a community of this strength and size and that must be applauded. 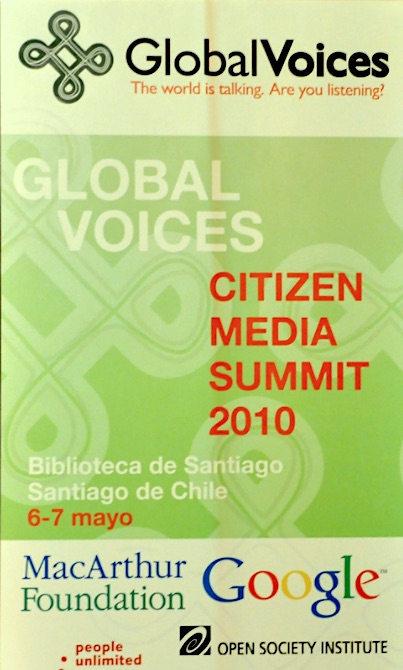 Whilst 2 days was too short for someone not involved in the internal meetings (by day 2 I was only just getting to know people and make solid connections). There was good participation in the open sessions formats and the panel discussions were lively, though not always deeply engaging. This was reflected in the conference twittering that frequently said no more than “session X starting in room B now”, or “I’m in room C – XX is talking about X.” The tweets did, however, improve over time as people felt more comfortable to be more critical. These earlier tweets perhaps reflected the surface view of issues that were often apparent in the sessions; things often didn’t seem to get beyond presentations or fairly polite discussions. There was a danger the event was becoming a Global Voices love-in.

The final session on internet freedom with Global Voices co-founders Ethan Zuckerman and Rebecca McKinnon was more lively, passionate and critical. The question that interested me most was raised in this discussion and was neatly summarised as “we’re building public spaces on private infrastructure”. I found Global Voices somewhat uncritical of this problem and too close to the companies who own and control the tools so many of us rely on. The plethora of sponsors such as Yahoo, Google, the Gates Foundation and the session with YouTube Senior Manager for Communications discussing content takedowns, was indicative of this. At no point was the huge power of YouTube itself questioned – only how we might petition them more effectively. There seemed to be certain politeness that prevented asking some hard questions. The free software culture and its critique of ownership and control were certainly missing.

A key interest of mine is video but it seems that the strength of the Global Voices project is text, though I think there are a lot of opportunities for video blogging, especially the aggregation of video content globally, as EngageMedia is currently experimenting with through the redevelopment of the http://transmission.cc site. Given the discussions that occurred around access and literacy audio and video materials are key to engaging larger audiences.

Other concerns were the presence of the World Bank and the US State Department – this really was a little too close for comfort regarding how blogging is being seen and what agendas it might serve, as well as how the independence of a space like Global Voices is perceived. The internet freedom discussions heard some criticisms regarding the US government’s rather selective approach to pushing internet freedom – often focussing on official enemies such as Iran and ignoring the censorship in allied states such as Tunisia and Egypt.

Here we can see the danger of the middle ground that Global Voices occupies – both right and left are for “internet freedoms” however advocacy for such freedoms can be used rather selectively to promote larger foreign policy goals with activists caught up in the middle. This middle ground does, however, leave Global Voices in a very fundable position, but also amid many contradictions and in danger of alienating some of its bases.

Finally, the thought that stuck with me most through the event was a comment made by a Russian blogger lamenting the lack of achieving real-world gains from the blogosphere. He felt there was a disconnect between “netizens and citizens” that meant the online world could talk as much as it liked but they were generally ignored. This highlighted for me the need to get content off the net and link it with social movements to ensure it achieves concrete changes. There is a danger that the blogosphere is just an urban, middle-class indulgence that talks to itself without making real-world, offline changes. Content needs to be linked to action and also “old media” such as TV and radio which still provide the vast majority of people with their daily information.