EngageMedia Workshops in Bandung and Yogyakarta 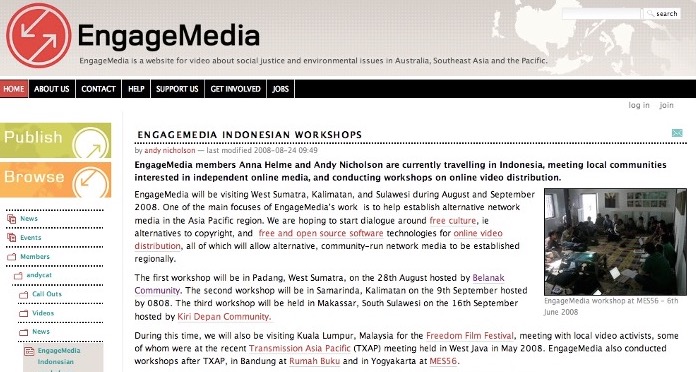 In June 2008 EngageMedia held workshops in the cities of Bandung and Yogyakarta on the island of Java in Indonesia. The workshops involved practical online video training, an introduction to FOSS (Free and Open Source Software) tools for video distribution online, a discussion about online distro in Indonesia, and a report-back from the Transmission Asia-Pacific meeting in Sukabumi in May 2008.

Our first online video workshop in Indonesia this year was held in Bandung, hosted by local organisations Kine Ruku and Common Room at Rumah Buku. Rumah Buku is a bookshop, lending library and cultural space in Bandung.

Our second workshop was held in cultural capital of Indonesia, Yogyakarta, in Central Java. IVAA organised the workshop for us, in collaboration with Combine and hosted by Mes 56. Combine had arranged to share their internet connection from their nearby office via microwave relay and expanded their bandwidth for the day to accommodate 25 people uploading and downloading video at one time. Unfortunately, the local area which Combine is located in had an unexpected power blackout, but the organisation was impressively resourceful and managed to source an emergency power generator and get us online nonetheless by the afternoon.