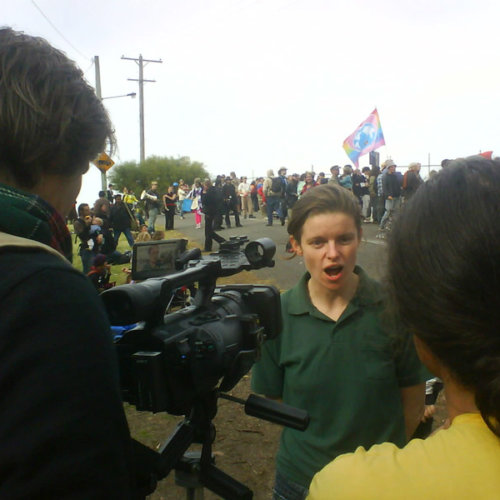 EngageMedia helped to coordinate an independent media centre for Climate Camp Australia 2008 (July 10 – 14) at the Octapod, a not for profit independent arts and new media organisation based in the heart of Newcastle. Around 20 video makers, photographers and bloggers used this space to create their own media coverage of the Climate Camp workshops, discussions and actions to build a community-based movement for real action on climate change. We were able to present our own stories as a counter-measure to the often simplistic and conflict-based accounts presented in the mainstream media. Climate Camp has been a rich and diverse exploration of positive action on climate change, and ways to build alliances by the many different communities who are stepping up their efforts to convince governments to take real action and to take it now before it is too late. The major focus of the camp was on coal exports, as Newcastle is the world’s largest coal port, and therefore one of Australia’s major contributions to greenhouse gas emissions.

Protesters are often portrayed in the media as hysterical, or even violent. The true story of climate camp was one of colourful and creative protest, from radical cheerleaders to zombies dancing to samba-bands beats played on garbage bins, clowns, mums, dads, kids, students and representatives from unions and workers who work directly or indirectly with the coal industry. A comprehensive and engaging account of Sunday’s day of action, which stopped coal trains from running to the Port of Waratah for 6 hours, can be found here:

Another story which didn’t get played in the mainstream press was the informative and intelligent workshops and plenary sessions on creating alternative industries, and green jobs to replace those in the coal mining and export industries in areas like the Hunter. The coal industry not only contributes greatly to climate change but mines are very damaging to the environment and to the communities around them. Community activists from areas where coal mining is currently rapidly expanding talked of the serious health effects and reduction of their quality of life from coal dust, noise and light pollution, as well as rivers and swamps and other delicate eco-systems that are being destroyed by both open-cut mines and those underground such as longwall mines, which can shatter huge areas of land, letting rivers and streams run away forever through cracks in the earth.

Ex-coal miner Graham Brown talked at Climate Camp of the need to make a socially-just transition from fossil fuel economies to a renewable energy future. A long time worker in the industry he has many practical and workable ideas of how to make this happen, given the political will and broad-based community support:

Sundays actions were a brave and urgent call to action, with activists using the proven tools for social-change of direct action and civil disobedience to bring the message of Climate Camp to the world. The mainstream media, from a so-called objective observational point of view, are unable to capture the human story of individuals who are prepared to take their concern for their planet, their fellow humans, and the generations to come to world attention, risking arrest and violence from the police to have their voices heard.

This video captures activists who found their way under the fence to lock themselves on to a coal train to prevent the trains from running, giving you the rare chance to hear from these people directly in this moment of why they felt the need for such action:

Peter Grey, a Newcastle resident who was arrested for his part in non-violent direct action to stop the coal trains on Sunday, tells us about the NSW state government plans to double the coal exporting capacity of Newcastle, paying no heed to the scientists who tell us we must stop burning fossil fuels to stop runaway climate change. He speaks eloquently of the importance of this issue, like every living organism on this planet is threatened by the climate crisis, and about his joy in participating in this historic occasion, one of the most empowering experiences of his life:

Climate Camp happened just after the Students of Sustainability (SoS) conference at Newcastle University, giving many young students the opportunity to use their new skills and knowledge gained during SoS in a real-world protest environment. In this video one participant manages to break through and climb aboard the coal train to get his hands dirty with the dirty fuel which is polluting our planet and deliver his message about converting to renewable energy alternatives:

Media activists and independent media creators also had an opportunity to network with each other and share their skills, equipment and enthusiasm for presenting an alternative view. Participants in the space learnt from each other how to publish their blogs and photos, and edit, compress and upload their videos to EngageMedia and beyond. We will take these skills back with us to our towns and cities around Australia, to continue to create the kind of participatory media which has the power to bring the community into national conversations on the most important issues of our times. 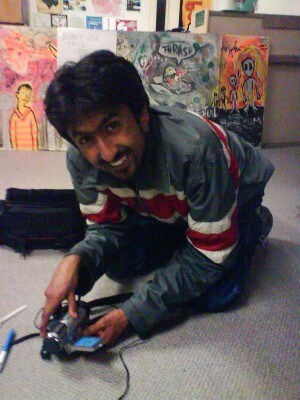 Many thanks go to the Octapod for providing their new community media space for independent media makers to publish their work during Climate Camp.

The Octapod supports a number of projects, community groups and creative types by providing an administrative base and important resources including a large meeting space, web hosting, zine library and project management advice. Octapod is interested in working with local communities, using arts-based processes as a way to engage, inspire, give voice and create change. If you are part of a COMMUNITY and see the value of arts-based processes, OR if you are an ARTS/MEDIA/CCD WORKER, and would like to get involved, please contact Christina at Octapod (4927 0470 or podadmin[at]octapod.org or drop in Thurs/Fri 10am-5pm) to 3/231King Street, Newcastle.