On the 5th of July, International Day of Action Against the G8. In solidarity with the planned mass demonstration in Sapporo and anti-G8 activists worldwide, Singaporean activists held a brief protest outside the Japanese Embassy in Singapore. 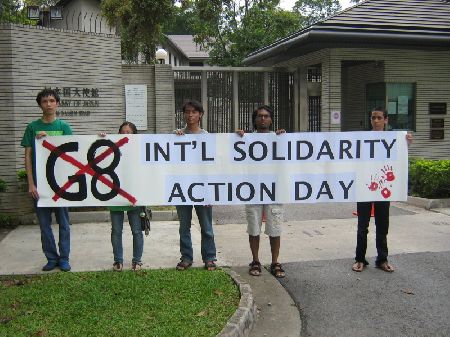 Today is the 5th of July, International Day of Action Against the G8. In solidarity with the planned mass demonstration in Sapporo and anti-G8 activists worldwide, we held a brief protest outside the Japanese Embassy in Singapore.

As we gathered outside the gate, we were met with a hostile reception from the security guard on duty, who threatened to call the police if we did not leave immediately. Undeterred, we unfurled our banner and took pictures. Later, when we asked to hand a collective letter to the Japanese ambassador, the guard refused to cooperate. We were also stopped from depositing the letter in the mailbox. One of us attempted to reason with the guard but he would not listen. In the end, we had to leave without submitting the letter. We will try again on Monday.

The embassy must have been put on alert during the G8 summit, for the guard appeared to have anticipated our actions. He was probably told to refer anything peculiar to the police. Here, we lament the fact that demonstrations are relatively uncommon and risky in Singapore. Repressive laws require police approval for public gatherings of 4 or more people. These laws are selectively enforced and used to quell dissent.

Our letter is reproduced below.

We are a group of Singaporeans who have been following the worrying turn of events leading up to the 34th G8 summit in Hokkaido, Japan this year.

We express our alarm at recent news of foreign scholars, independent journalists and media workers being detained at the airport and subjected to long hours of questioning. Among those held and probed is Ms Susan George, a well-known political scientist and writer on Third World poverty critical of the G8.

There have been reports of intrusive searches conducted under the pretext of “anti-terror” measures.

Those approached by the authorities have been required to declare their schedule in Japan, with details of activities for each and every day of their stay. Some have had their visit cut short while others, such as activists from the Korean Confederation of Trade Unions, have been outright barred from entry into Japan.

We denounce these measures as they violate both the constitutional rights of Japanese citizens and the human rights of foreigners entering Japan. It worries us that the level of security this year will set new precedents for future summits in a grim trend of increasing intolerance towards mounting opposition.

Like many others, we see that the summit venue in Lake Toya was deliberately chosen in order to avoid civil society, requiring time consuming and expensive trips activists and demonstrators cannot generally afford.

As you know, the G8 is an informal grouping of eight of the wealthiest industralised nations. Decisions arrived at G8 meetings affect billions around the world due to the group’s collective dominance of the world’s economy. Yet member countries constitute only about 14% of the world’s population, with Japan as populous Asia’s only representation and none from Africa or Latin America.

This being the case, policies set into motion show a lack of proper consideration of problems faced by the global south, with disastrous results.

The reclusiveness, lack of representation, together with heightened police presence and security measures at the summit this year, further adds to the already elitist image of the G8. It appears to us as though G8 leaders are bunkering down, seeking refuge more than ever when they should instead open up and pay closer attention to criticism from the ground.

For the suppression of dissent with severe curbs on the right to freedom of expression and assembly, Singapore has over the years acquired a dismal reputation with human rights groups and professional bodies such as Amnesty International and Reporters Without Borders. Japan should avoid falling prey to the same authoritarian tendencies which may one day result in a severe backlash.

We hope that you would communicate our views to the Japanese government. Thank you.

A group of concerned Singaporeans