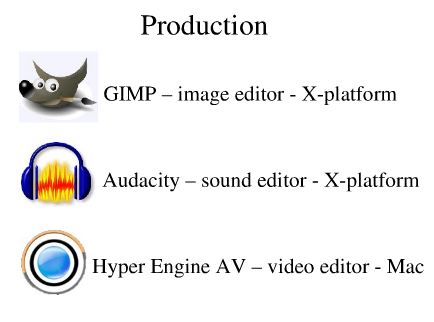 On Saturday 4th of August 2007, EngageMedia conducted a workshop on Free and Open Source Software (FOSS) at the Media Resource Centre in Adelaide. Topics covered include the historical and social/political basis for free software, differences between proprietary software, free software and open-source, FOSS tools for different parts of the production cycle (pre-production, production, post-production and distribution), FOSS web applications such as MediaWiki and WordPress, and FOSS desktop applications such as Thunderbird, the GIMP, Audacity and Handbrake.

The Media Resource Centre (MRC) in Adelaide is South Australia’s screen development agency, supporting the work of independent film producers and supports the development of a strong, diverse and innovative screen industry in Australia. The MRC provides entry-level to early-career film and digital media makers with access to production equipment, subsidy programs and advice on all aspects of professional and project development, production and marketing. The MRC manages the Mercury Cinema, which delivers a unique screening program to Adelaide audiences and provides local practitioners with the opportunity to screen their works.

The MRC hosted a workshop conducted by Anna Helme from EngageMedia on FOSS for Media Makers. A range of FOSS tools to cover the production cycle from pre-production, production and post-production through to distribution were covered including both web-applications and desktop software.

EngageMedia was very happy to partner with the MRC for this workshop, as MRC shows a forward-thinking approach by investigating new technologies such as broadband distribution and free and open-source software for the benefit of its membership.