In 2009 EngageMedia and Kunci Cultural Studies Center launched VideoChronic, a collaborative research project charting how activists are engaging with video technologies in Indonesia, addressing some of the issues of technology-mediated social movements, and exploring the potential and limitations of online video distribution.

This 140-page book presents both English and Indonesian versions of the research as well as colour illustrations including a visualisation of the development of Video activism and online video.

The past decade in Indonesia has seen a dramatic increase in the use of video as a social change tool by community, campaign and activist organisations. Access to the tools for producing video has become increasingly democratised over this period and rapidly adopted. Since the fall of Suharto’s New Order regime, space has been opened up for a host of new media projects to emerge. Individuals and organisations dealing with issues such as the environment, human rights, queer and gender issues, cultural pluralism, militarism, poverty, labour rights, globalisation and more have embraced video as a tool to communicate with both their bases and new audiences.

What groups are currently active in producing social and environmental video in the archipelago? What are the histories of that work? How is it currently being distributed? How are activists thinking they might approach distribution in the future?

EngageMedia launched the research publication Videochronic at one of its partner organisations, Ruang Rupa on March 24, 2010. 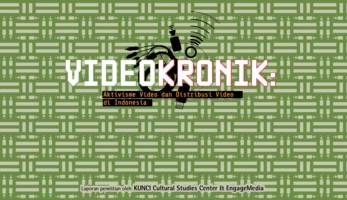 As activists continue to define their goals in the post-Suharto era, a new and exciting relationship is developing between social movements and the online distribution…