The Army of Video Activists in Bersih 3.0

07 May The Army of Video Activists in Bersih 3.0

April 28, 2012, marked a historic day for Malaysians. More than 250,000 people went to the street for the Bersih 3.0 rallies all over the country. Although protesters were peaceful, they were met with the brute force of the police. More than 400 people were arrested, and many, even journalists, were beaten by the security forces. Thankfully, many video activists continued to capture the scenes. 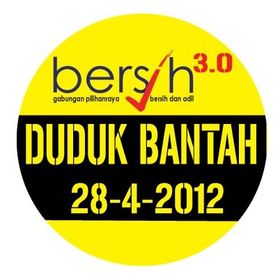 Many of EngageMedia’s friends in Malaysia were also on the street. Arvind Raj and Hisam Salleh were covering for Free Malaysia Today, Ineza Roussile was making her second Bersih rally appearance, and of course, there were our good friends in Komas and the always reliable citizen journalist Uncle KS Tan.

Hisyam Salleh, captured the clashes between police and protesters, also journalists, in Dataran Merdeka. His media, Free Malaysia Today also opened a forum for readers to share their Bersih 3.0 experience. Check out Hisyam’s testimony in Malay or Thai.

Ineza, this time around documenting for Bersih 428 (a tag used to represent the date), was stationed around Kuala Lumpur’s Central Market. She wrote a blog chronicling the experience. She said:

“The mood was still very energetic. Everybody there, young and old, were chanting and singing. Once someone started with, ‘Bersih! Bersih!’, the crowd would respond with a huge roar of chants. It felt like victory.”

But a few paragraphs later reality struck as the protesters, including Ineza, were tear-gassed by the police.

“It was my first time getting tear-gassed, and it’s definitely worse than you could ever expect. Feeling the burning chemicals in your lungs, and the uncontrollable coughing and tears streaming down your face, it really is a horrid experience.”

For that particular case, Kiki Febriyanti, young but seasoned rally video maker, offered an article (in Indonesian) for preparing ourselves against tear gas.

You’ll find more tips and articles like the above in EngageMedia’s upcoming “Video for Change Toolkit”.

To watch more Berish 3.0 videos, the organizers put them together in the Bersih 3.0 YouTube Channel. Find out more also about the exploits of MalaysiaKini citizen journalists CJ.MY who were right in the middle of the hot zone.

As Ineza closed her blog, she asked: “a free and fair election is the most basic necessity of so-called democracy, if a crowd that big was moved to the streets for something so basic, then how can anyone in power claim that Malaysia is democratic?”

Well, at least the army of Malaysian video activists will be around to not just witness but try to make a change. Well done!